The Playwrights' Lab comprises our writer-driven readings and workshops series. Each resident playwright has unlimited access to schedule one or two-day play readings. New Dramatists also provides the playwrights with numerous opportunities to participate in one or two-week workshops, longer sessions designed to flesh out existing plays or to begin brand new works for the stage. These readings and workshops are fully supported by New Dramatists through free work space and the provision of a director, stage manager, and professional actors. 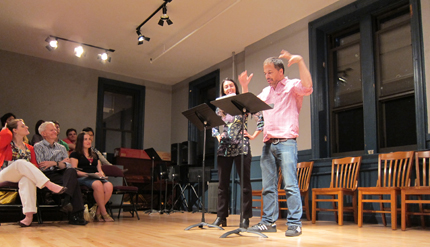 The initiative, conceived by New Dramatists and underwritten by the Andrew W. Mellon Foundation, addressed the field-critical issues of new works “stalling” in development with no resulting full production and the special challenge of securing subsequent productions after a world premiere. Full Stage has established five institutional collaborations between an eclectic mix of New Dramatists writers and an equally diverse group of producing organizations from across the country. Each partnership provided a $25,000 commission to a writer; supported two years of enhanced writer-driven development in New Dramatists’ Playwrights Lab; and culminated in the full production staged by the partner theatre.

Full Stage USA was made possible by a lead grant from the Andrew W. Mellon Foundation.

The Jerry A. Tishman Playwrights Creativity Fund offers residents the opportunity to workshop new plays or musicals for up to five days.

Blending the flexibility of a one-day play reading with the intensive focus of a two-week workshop, these workshops are structured according to each writer’s needs at any stage of development enabling playwrights to experiment and explore in depth with collaborators of their choice. The writers’ multi-year tenure here ensures they have access to the Fund whenever they most need the resources.

The Fund is sustained by the Jerry A. Tishman Living Trust. It was established in 2008 with a lead grant from the Andrew W. Mellon Foundation.

PlayTime provides three or four New Dramatists residents with a two-week writers’ retreat, right in the heart of New York, with their collaborators and a company of actors.

PlayTime is a laboratory designed to give playwrights the opportunity to explore, workshop, rethink, and revise ambitious new works of theatre by drawing from a supportive resident company of actors, directors, stage managers, staff, and fellow playwrights.

The round-the-clock schedule offers intensive and flexible time for rehearsal, rewrites, feedback, and community engagement. PlayTime has helped bring close to fifty plays to fruition since 2001.

PlayTime is made possible by major funding from Concord Theatricals, Jody Falco & Jeffrey Steinman, and The Ted Snowdon Foundation.

The Composer-Librettist Studio, offered in partnership with Nautilus Music-Theater, gives writers a chance to face the joys and challenges of Music-Theatre.

The Studio, now in its 28th cycle, rotates collaborative teams between five New Dramatists residents, five composers, and five singer-performers. Ben Krywosz, Artistic Director of Nautilus Music-Theater and his long-term music director Roger Ames work with these writers, most of whom are new to the music-theatre form, leading them through a series of exercises exploring collaborative principals, the possibilities of this blended form, and artistic community. At the end of the Studio, each playwright has worked with each composer and 25 new music-theatre pieces have been created by the group.

At New Dramatists, we take great care to design residencies that are most conducive to artistic growth and playmaking, in which our writers have complete creative authority. We make an unparalleled, seven-year commitment to each of our 50 resident playwrights, offering unlimited use of our workspaces and access to an artistic community consisting of fellow playwrights, professional paid collaborators, and dedicated support staff.

New Dramatists is distinguished by the length of our playwright residency. By extending seven years to each writer, free of charge, we open the possibility of building a body of work over time, rather than focusing on a single play or project. The full lifecycle of a play can take years, and our writers often work simultaneously on projects in different stages of fruition: researching an idea, staging a script, or revisiting work that has been set aside. Each writer leads his or her own years here: selecting what to work on when, choosing collaborators, setting timetables, and designing process.

Our facilities are housed in a converted church in the heart of Manhattan’s theatre district. The building offers a total laboratory, including a mainstage theater space; a flexible studio space; a manuscript library that is open to the public; a meeting room; private writing rooms; and three residence rooms for out-of-town writers and collaborators. In addition, our workspaces are equipped with essential tools for a playwright: wireless internet access and unlimited free photocopying.

With each “class” of five-to-eight playwrights in residence for seven years, our playwrights are surrounded by a community of 50 peers actively using our facilities and an alumni network comprised of over 600 of the most accomplished writers in the field. New Dramatists positions writers at the center of the creative team by offering a roster of 500 professional actors, directors, musicians, composers, designers and stage managers whom we hire and pay directly. While in residence, our playwrights receive unprecedented professional support from our 10-person staff, including personalized dramaturgical and career consultation, advocacy, and outreach.